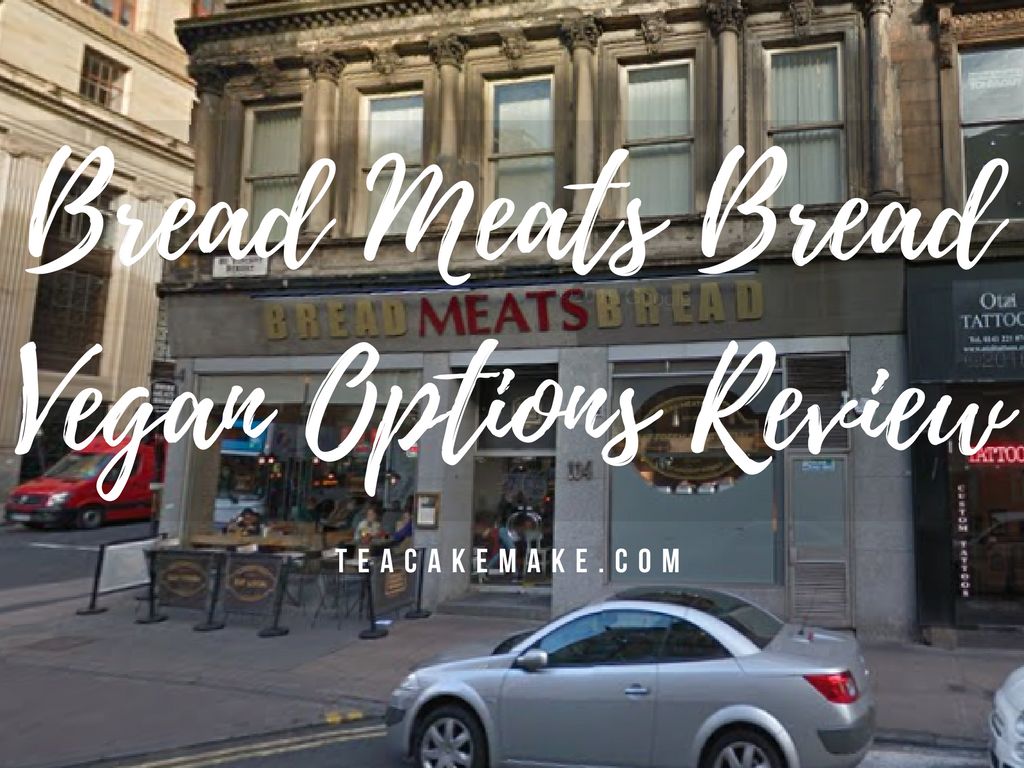 When someone who is unaware of what the place serves hears the words Bread Meats Bread, they don’t automatically think vegan friendly eaterie. However, this city centre based restaurant is a joy for omnivores and vegans alike!

In anticipation of our honeymoon to Glasgow and Edinburgh, I made a list of all of the places I wanted to visit, and eat at! Bread Meats Bread was one of my priorities, and we made sure to pay it a visit on our first night in the city.

What is Bread Meats Bread?

There are currently 3 branches of Bread Meats Bread – Glasgow Centre, Glasgow West, and Edinburgh. We paid a visit to the Glasgow Centre branch, which you can find on St Vincent Street, just a few minutes walk from Glasgow Central station.

Bread Meats Bread sells themselves as serving fresh, good quality food, made in-house and using the best local ingredients. So you shouldn’t be seeing some of the pre-prepared stuff you’d be used to at many chains. They’re family-run and staff aim to serve you as one of their own; ie they are warm and friendly, but not over-the-top!

So let’s have a chat about the vegan options on their menu! 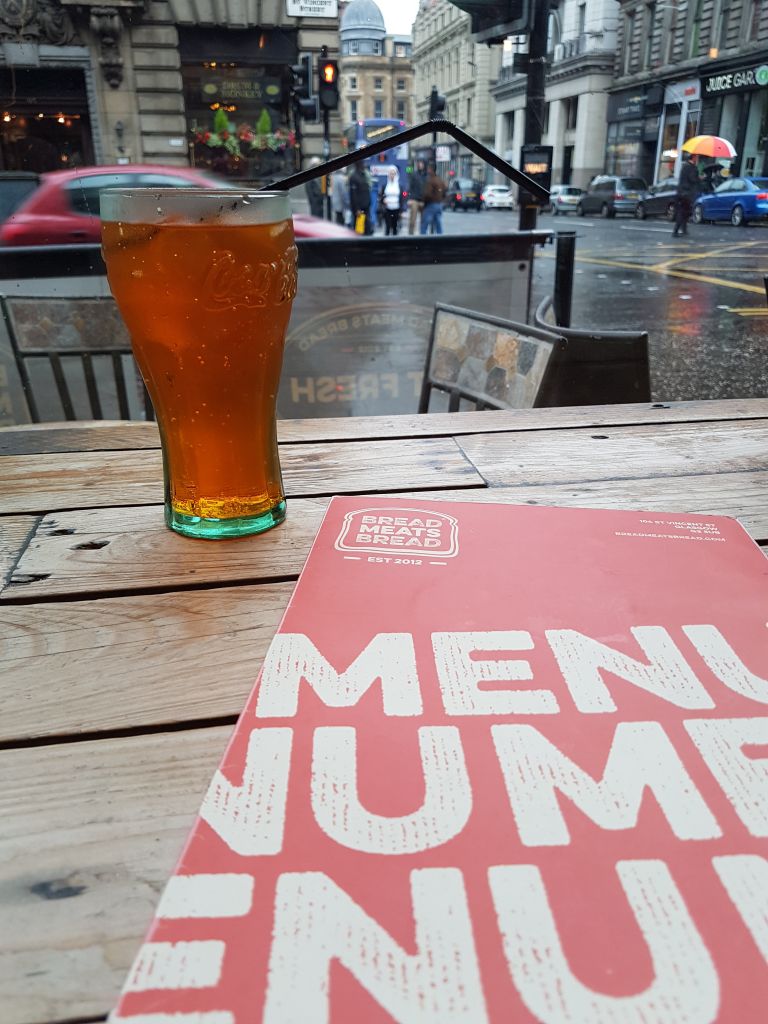 So, lots to choose from at the City Centre branch! And guess what? The Glasgow West and Edinburgh locations also serve VEGAN CHICKEN. Yep. They make their own seitan in house, and create the following:

We didn’t manage to pay Bread Meats Bread Glasgow West or Edinburgh a visit to give the above a try, however, we’ll be making sure that it’s on our list for our next trip to the area!

What I ate at Bread Meats Bread Glasgow Central

Anyway, let’s get onto what I ate, and what I thought about it!

I ordered the Vegan Bacon Cheeze Poutine, my non-vegan hubby ordered the Wolf of St Vincent Street burger, and we had a side of onion rings to share. 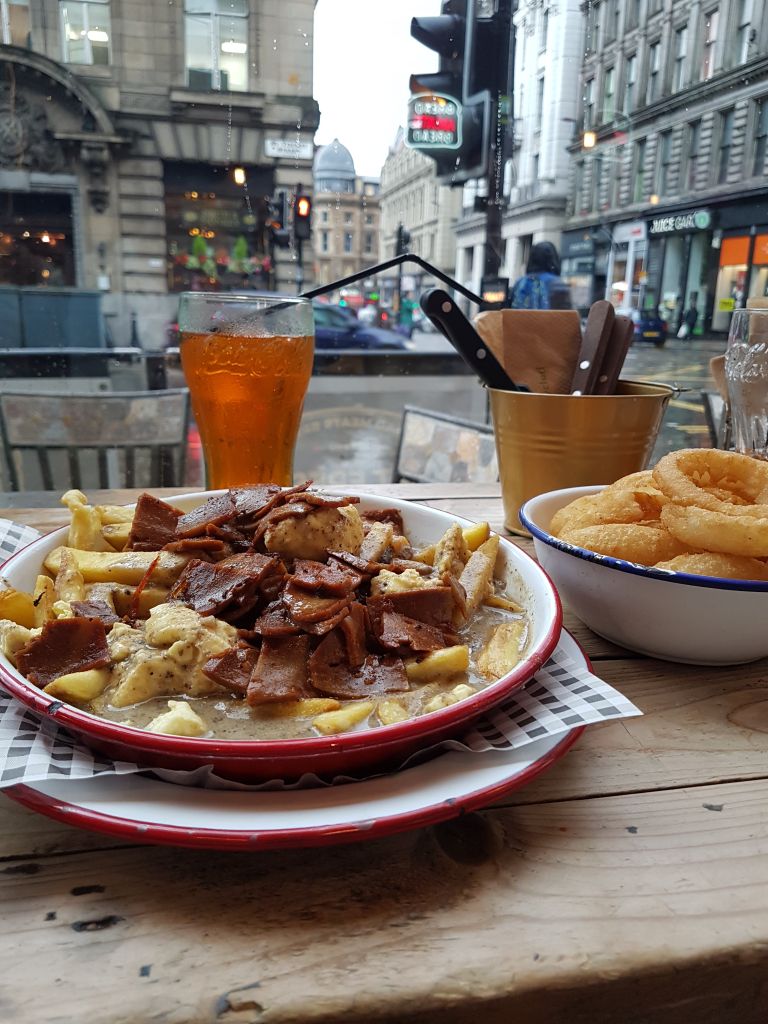 If you don’t know what poutine is, it’s traditionally chips, topped with gravy and cheese curds. This vegan version is chunky chips, topped with mushroom gravy, vegan cheeze curds, and I chose to have the addition of vegan bacon. Now, I’m not sure if any of you know this, but I’m very particular about sauces making things wet. I’m usually TOTALLY against it. I can’t even have beans on toast, the beans can’t touch the toast in case it gets soggy, so I have beans and toast instead. However, I challenged myself with this as it just sounded so delicious. And I was glad that I challenged myself! This was so good. The mushroom gravy was a mixture between the gravy we’re used to in the UK, mixed with the gravy you’d have in the USA if you’d ordered biscuits and gravy – sans the sausage and sausage fat, obv.

I also really enjoyed the vegan bacon. It wasn’t crispy or chewy, but tasted delicious. And of course, animal free! The only doubts I had was with the cheeze curds. For a while they tasted so good, and I enjoyed them. However, as I continued the meal and they cooled, their texture became more like scrambled egg, which I really didn’t enjoy, as I didn’t want to be reminded of eggs. Despite this, the overall dish was blooming lovely, and you know what? I’d totally have it again, despite the eggy-ness of the cheeze curds!

The beer battered onion rings were of course, delicious – I mean, why wouldn’t they be? And of course, since it was my first day of my first time in Scotland, I had to get a glass of draft Irn Bru. Of course it tastes different and better than it does in a can, if you wondered.

What the non vegan ate 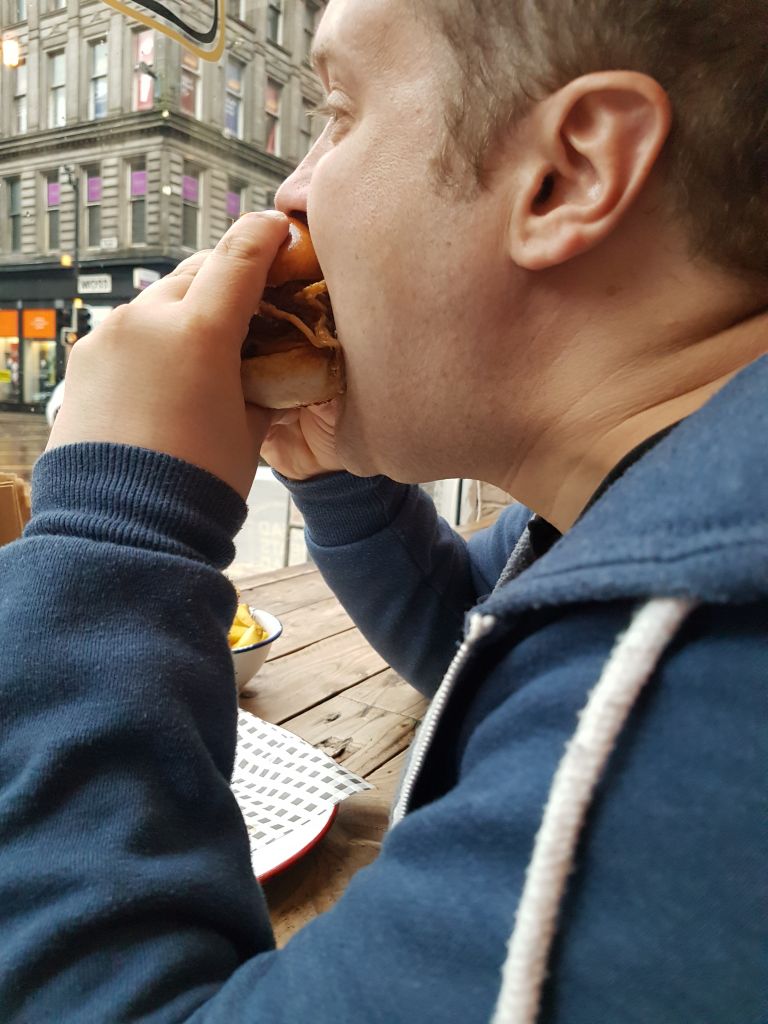 My non-vegan companion also really enjoyed his meal – completely scoffed his burger. Even though he isn’t vegan, you’ll see from the other places we visit that he eats 80-90% vegan anyway! It’s usually when we’re out that he doesn’t eat vegan, and has said that he’ll change over one day… he’s just not ready yet! He’ll get there, by the way. 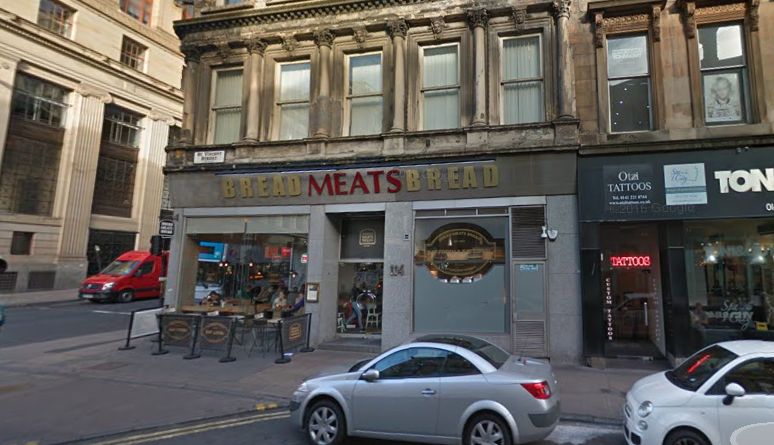 The price: we paid just under £50 for 2 of us to have mains, sides, and drinks. All from our own pocket, by the way.

Overall verdict? A must try. And a must return. I’ve got my heart set on trying their chick’n dishes… get in my belly!

Have you been to Bread Meats Bread before? What did you think of it, and what did you try? If you’ve not been there, what would you like to try? 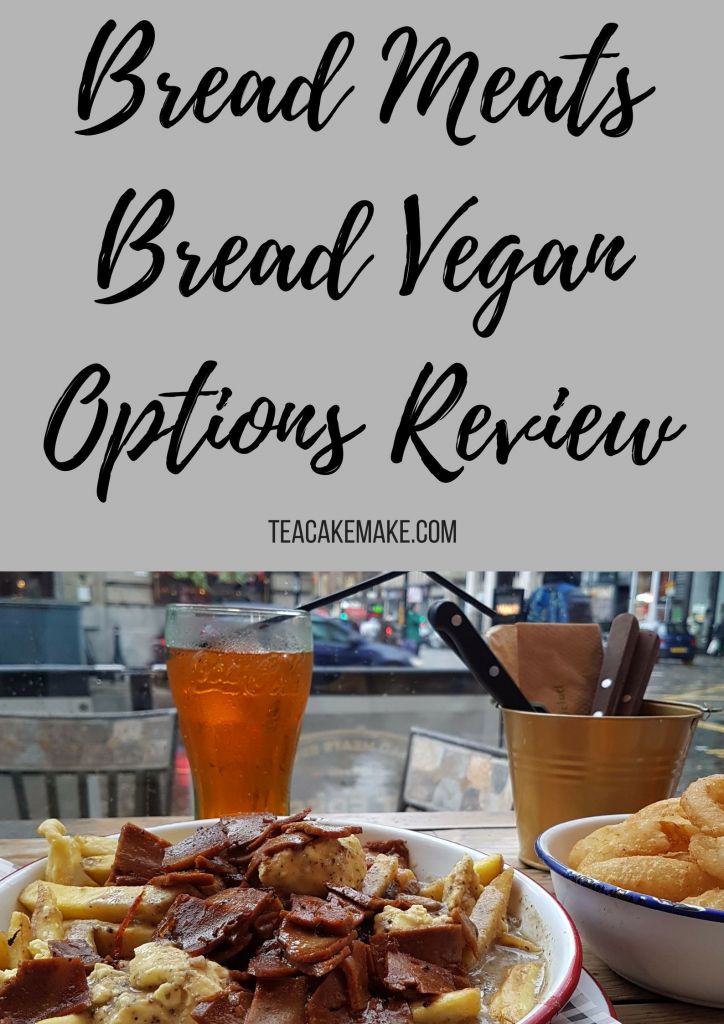